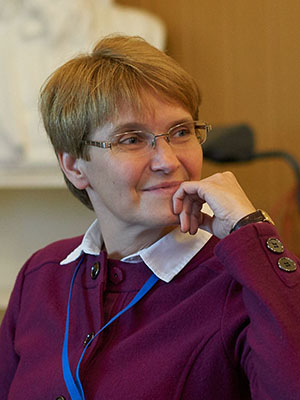 Head of Fluid Mechanics Department,
Professor of the Russian Academy of Science
Doctor of Physical and Mathematical Sciences

Elena Kustova graduated from Saint Petersburg State University (1988), and received her PhD in Mechanics (1993) and doctoral thesis (2002) in the same university. Since 1993 she has been working at Saint Petersburg State University as a researcher, associate professor (1997-2003), professor (since 2003). In 2015, she was elected as a Professor of the Russian Academy of Sciences in the Department of Energy, Engineering, Mechanics and Control.
She worked at the Institute of Thermal and Industrial Systems (IUSTI) in France (Post-doctoral fellowship, 1995-96);  invited as a visiting professor at the University of Provence Aix-Marseille (France, 1998-2007), the University of Bari (Italy, 2000, 2010), von Karman Institute for Fluid Dynamics (Belgium, 2014), Federal University of Paraná (Brazil, 2014).
She conducts joint scientific research with scientific groups from Italy, France, Belgium, Brazil, USA.
During the last years, she was a leader of more than 20 research projects funded by Saint Petersburg State University, Russian Foundation for Basic Research, Russian Science Foundation, European Space Agency.
Member of the Editorial Boards of the Journal of Technical Physics, Fundamental and Applied Hydrophysics.
Member of the international advisory committee of Rarefied Gas Dynamics Symposia.
Elena Kustova is the author of more than 150 publications.

Under the leadership of Elena Kustova, more than 50 bachelor and master thesis and 5 PhD thesis were defended. In the research projects, students, graduate students, young scientists are actively involved. Over the past 5 years, more than 25 young scholars under 30 years have been involved in various research projects.